My name is Debbie and this is a bit about me and my breast cancer experience and also how Beautiful You has helped and supported me over the years.
In Nov 2005, at age 43, I was right in the middle of my pre-Christmas rush, as the owner-operator of my own business.
Still, I decided to make the time to see my GP about a couple of suspicious breast lumps I’d been keeping an eye on .
Over a couple of months, I’d become increasingly convinced they needed investigation.
I’d discovered them during my monthly self-examinations. 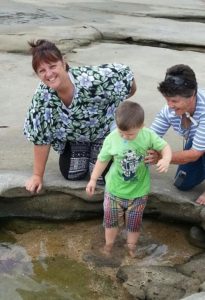 It was like a crazy whirlwind within a week I was diagnosed with invasive adenocarcinoma (breast cancer that has begun in the ducts and spread into the surrounding breast).

I was booked into surgery for a modified radical mastectomy and axilla lymph node resection.
Turned out there was actually 5 x different tumours in the breast and they were all thriving on my oestrogen (ER-positive).
Over the next eighteen months, I successfully juggled the running of a high demand, high-stress business, and my medical treatment. I was also the sole provider for my family and a sole trader, responsible for paying a mortgage and keeping the roof over the families head. (My husband is on a disability pension)

I went on a clinical trial (nearly died from an allergic reaction) , went onto Tamoxifen which left me with side effects that made working even more difficult. I also had a second mastectomy and then finally a total hysterectomy.
Eventually, I felt that I shouldn’t keep giving 100% to my clients and also expect to deal with my own medical issues.
So, I closed the business in 2007, and my husband and I decided that we would move to the coast like we’d wanted to do for years. We bought our adult son and (future) daughter in law with us.
The only “downside” was, that I too ended up on a pension, due to the permanent side effects of cancer treatments. Still, that’s OK – I’m still here.
I was looking for Breast Cancer support groups in the area when I heard about Beautiful You and contacted Deb Clayton and explained that I was looking for somewhere to make contact with other cancer patients who may be able to share their medical tips on various treatments and even breast reconstruction etc.
That was several years ago now.

Since then I have enjoyed the monthly support groups, various activities and been to informative talks with expert medical doctors , had soothing nurturing treatments when I needed distressing. I have also been spoilt with tickets to special events (that we couldn’t otherwise afford to attend) .
Last year 2015 – as I was preparing for my breast reconstruction surgery (after 10 x years ) I had a CT scan to help surgeons plan the details of the surgery .
Instead , I was told that they had discovered that the cancer was back and that this time it is terminal .
I can have treatments, to try and “buy me more time”.
I’ve been told I have a 25 % chance of getting to 5 x years and that the prognosis is “ bleak”.
The tumours are inoperable and I will be undergoing some fairly aggressive treatments .
Since November , Beautiful You has reached out to offer (even more) assistance and emotional support to me.
Debbie checks in to see how I’m doing with the treatments and if I need help with housework or other things that
will be difficult for me/us.

There have been unexpected surprises and even gifts that have been uplifting and there’s something special about knowing that people care and want to help .
It lifts my spirits and helps to spur me on when I’m tired or flat.
Beautiful you have organised and funded some lymphedema drainage massages for me.
Very important treatment to help out with the side effects of radiation burns and scarring , that I simply can’t afford on a pension.
There’s been everything from fresh fruit and vegies to a pass for me to be able to take my three year old grandson to
Underwater World in Mooloolaba. Creating happy memories for him is so important to me.
The work that Debbie and all those involved is wonderful and very much appreciated .
The many volunteers , the people who donate goods to the op-shops , the fund raisers and the businesses who support Beautiful You with donations and other assistance … really , it’s incredible. I would like to thank them

My journey with my daughter

A month later we learned that Renée had an aggressive breast cancer and although we did not know it at the time, it was the start of the fight for her life. As her mother my life changed in an instant.
Greg and I had always planned to retire to the Sunshine Coast, to be close to my children and Grandchildren, to travel, to be spontaneous and enjoy the fruits of successful careers and a wonderful marriage.
After Renée’s diagnosis I did not consider the fact that she would not be a breast cancer survivor, I just wanted to be with her, to support and love her. Greg and I decided to expedite our plans and moved. Our move was difficult, but understood, by our other children still in Canberra.
Renée was the most courageous woman I have ever met, even in her darkest times she never complained. She was one of a kind with an unsurpassed loyalty and generosity of spirit; she was the ultimate organizer of causes to help others. She was gregarious, hilarious, vivacious, wicked, fiercely determined, and larger than life. Renée was loved by so many; she had the ability to have wonderful friendships with such a diverse range of people that were part of her enormous social network.
Renée was an astute businesswoman in partnership with her husband, but her most significant role in life was as a devoted mother to her children. Her children were her life there was never a moment when they were idle. Footy, dance, activities, planning holidays she always had a project.
If Renée had a project you ducked for cover. She was the CEO, the queen of delegation and she took no prisoners, she had us all run ragged, she had a way of pulling you in, and getting you to do things you would never dream off (case in point my visit to the adult shop).

Renée became an ambassador for the Beautiful You Charity and worked tirelessly supporting other woman with cancer and helping Deb with Beautiful You fund raising pursuits.
I was more than Renée’s mother I was her Executive Personal Assistant. When her daughter started school we made a special pact to sneak off and have coffee or lunch all by ourselves at least once a week. This plan was short-lived as a month later our world shattered once again when we leaned she had secondary lung metastases. In true Renée style we just adjusted the venue for to the chemotherapy clinic. She would bounce in once a week and the staff would say to us “here are the girls’ for their bonding session.”
She was amazing still playing football when she had advanced secondary lung cancer. I remember her Doctor asking her at a consultation about her breathlessness. She replied, “It was OK the first half but I had to come off after that”. He was truly gobsmacked. At another consultation after we had been on a family holiday in Bali, he asked her if she had lost weight. She got up turned around hit her back side and said. Look at the size of my butt are you SERIOUS.

However difficult the circumstances, this was a truly beautiful time we shared together and one that Renée valued. She left me a cherished letter telling me how much she loved our special times together but was pleased when for a short time we were able to swap chemotherapy for massages from Deb at Beautiful You.
We were to be delivered another devastating blow in November 2011 when Renéedeveloped brain metastases and she became increasingly sick. As always Renée was determined to have an unequalled 6th birthday party for her daughter where a cast of 1000’s arrived at the house for dance party.
Our beautiful Renée also planned what was to be her last family Xmas. We were delivered the menu and delegation of tasks by email. For her to be surrounded by those who loved her fulfilled her wish for the complete family Xmas.

In February 2012 things were really deteriorating for Renée. She was becoming frail but her next primary focus was her son’s 8th birthday in March. Again she remained solidly determined and we celebrated another big bang event. What a great day she had.
Renée had never asked Doctor the question of time; she complied with everything he continued to throw at her to give us precious time. But the time had come; she needed to know and she asked. Knowing now that she only had months left, we cried, we loved each other and we spoke with gut-wrenching honesty. BUT THEN!!!!
Within hours Renée was on a mission to achieve absolutely everything she needed to do. My daughter and I were a team; we were in a good place together, as heartbreaking as it was she needed me to be strong. She had an agenda and was ruthless in her determination. We ripped the house apart she wanted everything in order for her family. She had us cracking, and everyday her goals were ticked off.

For me, accepting and dealing with the fact that my beautiful daughter was dying was as you can imagine very difficult. I did cope, even though some days I did not think I could get through another day. As her mother, I had to also remind myself everyday that Renée was in her early 30’s, she did not think like a woman my age and would never have the opportunity to learn, grow, and to experience life stages that afford women maturity, confidence, knowledge, wisdom and hindsight. For us, maintaining Renee’s emotional health through this journey was the priority and she set the bar very high for us all.
How on earth Renée achieved her last goal to go on an Interstate family road was beyond me. She was frail and deteriorating every day. It was so important for her to say goodbye to the people she loved. When she returned from this special trip, it signified to Renéethat she had ticked off her list and she could now refocus on dealing with the constant struggle to survive that her life had become.

Renée was surrounded by love in her final hours. She got to say goodbye to her precious children and a few special family members and friends. I was with my daughter for her first breath and her last. I am blessed to have had this time, not a thing undone, or a word unsaid.
It is very difficult to describe my life today. The reality is that life goes on, as it should. People move on, as they should. My private time alone and with my husband, are often fraught with emptiness, loss, and pain and longing for my daughter. There is not a moment that I do not think of her.
My daughter’s death has made me more aware of the beautiful things that surround me, and I am a better person for it. I am loved and supported by Greg and many wonderful friends, that seem to be able to say and do the little things that help you get up and do it all again.

Renée’s legacy is for Deb and the Beautiful You Charity achieving the dream of opening a retreat for women with cancer and their families.
At Renée’s service I finished with these words.

This site uses Akismet to reduce spam. Learn how your comment data is processed.